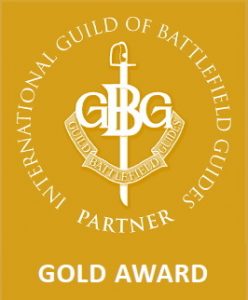 Battle Honours has been delivering class leading battlefield tours for 18 years for the discerning enthusiasts and military alike.

Known for their innovative approach to Guiding and their unbridled passion for their subject, owners Clive Harris and Julian Whippy are extremely proud of their association with the International Guild of Battlefield Guides which echoes their thirst for a quality narrative befitting of those who fought and died across history. Battle Honours are the chosen tour partner for The British Commission for Military History, The Western Front Association, The Gallipoli Association, The Salonika Society, The Royal Hospital Chelsea and the US National WW1 Museum of Kansas City.