The Guild’s 2020 Annual Conference and AGM was held over the weekend of 31 January to 2 February. With a good turnout from Members, we had a very full and enjoyable weekend.

Starting on the Friday afternoon, we visited Biggin Hill and the Memorial Museum on the perimeter of the airfield where Chris Finn, Andy Johnson and Paul Beaver led groups around the museum and the adjoining chapel. The highlight of the afternoon was however a VIP tour of the Biggin Hill Heritage Hangar  where we saw a marvellous collection of Spitfires as well as other historic aircraft. Some Members even managed to squeeze into the seat of a Spitfire Mk XVIe,  registration XWP.

On Friday evening, John Cotterill ran a fiendishly difficult quiz – an expert on the Staffordshire Regiments would have faired reasonably well – who would have guessed!

On Sunday morning, we received presentations from Victoria Wallace, the Director General of the CWGC, and Dr John Greenacre and David Wilson, both Accredited Members. Finally we were fortunate to welcome back Toni and Valmai Holt, Honorary Members of the Guild who have provided fantastic support to the Guild since its inception, and who gave us an inspirational talk on battlefield guiding. 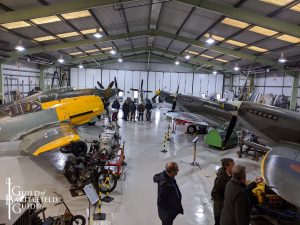