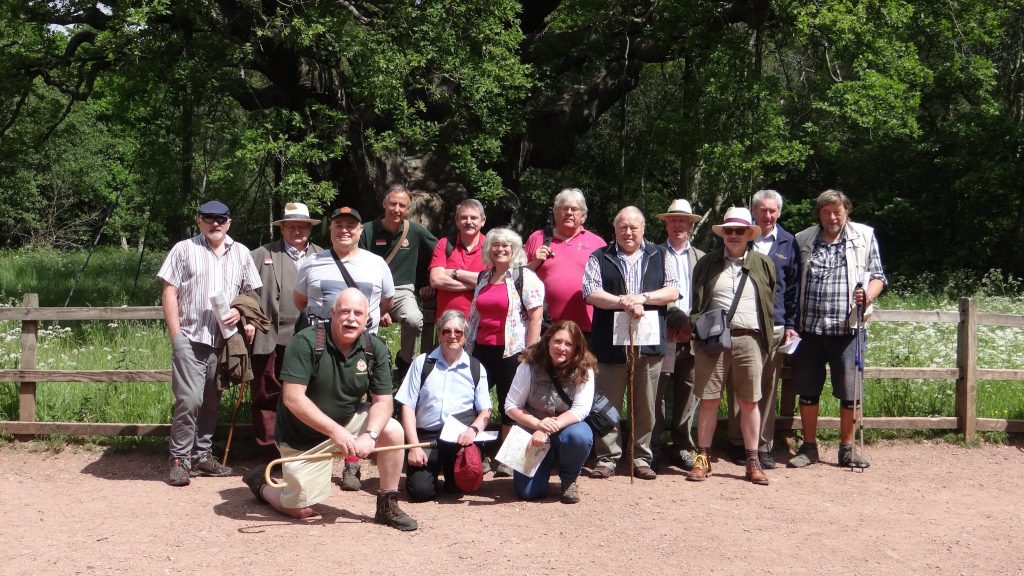 Everyone has a favourite period of times past and indeed, most of us have a preference when it comes to favourite interpretations of history. On Saturday 12 June, 15 Guild members met in Sherwood Forest to listen, to learn, to walk the ground, and take a fast-paced tour through the local area’s history – running the unexpected gamut of many Robin Hoods in the process, from Fairbanks to Flynn, and Taron Egerton to Russell Crowe.

David Harvey started us off in the company of Edwin of Northumbria – the eponymous Edwin of Edwinstowe, home to the Sherwood Forest Visitors’ Centre.

From arrows, to the skull and crossbones

The heart of the day, however, began in the shadow of the ‘heart of oak’, the Great Oak or Major Oak in Sherwood Forest, with John Cotterill’s thought-provoking introduction to the social legacy of Robin Hood. This was a stand that demonstrated the best of battlefield guiding, as we engaged in debate around the fact and fiction associated with composite characters, and were treated to a ‘can you name that Robin?’ exercise that was insightful … not least, as some of us showed our ages! Decamping from the Visitors’ Centre, we were also treated to a closer inspection through a tour of the Royal Lancers and Nottinghamshire Yeomanry Museum, which is based in the central courtyard at Thoresby Hall.

The overwhelming impression was that this small museum offers a rich, well-presented, and highly informative overview of the evolving history of amalgamated regiments. The Royal Lancers are an armoured cavalry regiment in 1 Armoured Infantry Brigade. Their infamous motto is one of the most recognisable in the British Army, striking intentional fear into their enemies with the skull and crossbones, and ‘Death or Glory’. The Sherwood Rangers Yeomanry has served with distinction, in particular during the Second World War – as an Army Reserves Squadron, it is the only reserves unit with unbroken service in armour since the end of that period of conflict; it is now known as A (SRY) Squadron Royal Yeomanry. And while the South Nottinghamshire Hussars was raised as a volunteer cavalry regiment in 1794, it rerolled as an artillery regiment in 1922, until 307 (SNH Yeomanry) Battery Royal Artillery went into suspended animation in 2014. Highlights of this visit – with thanks to the curator, Mick Holtby – included exhibits such as the copper bugle used in the charge of the 17th Lancers at the Battle of Balaclava, in 1854 (giving the deserved nuance to the phrase ‘Charge of the Light Brigade’), the 21st Lancers at Omdurman, 1898, and several displays that brought the Sherwood Rangers Yeomanry’s work into perspective. 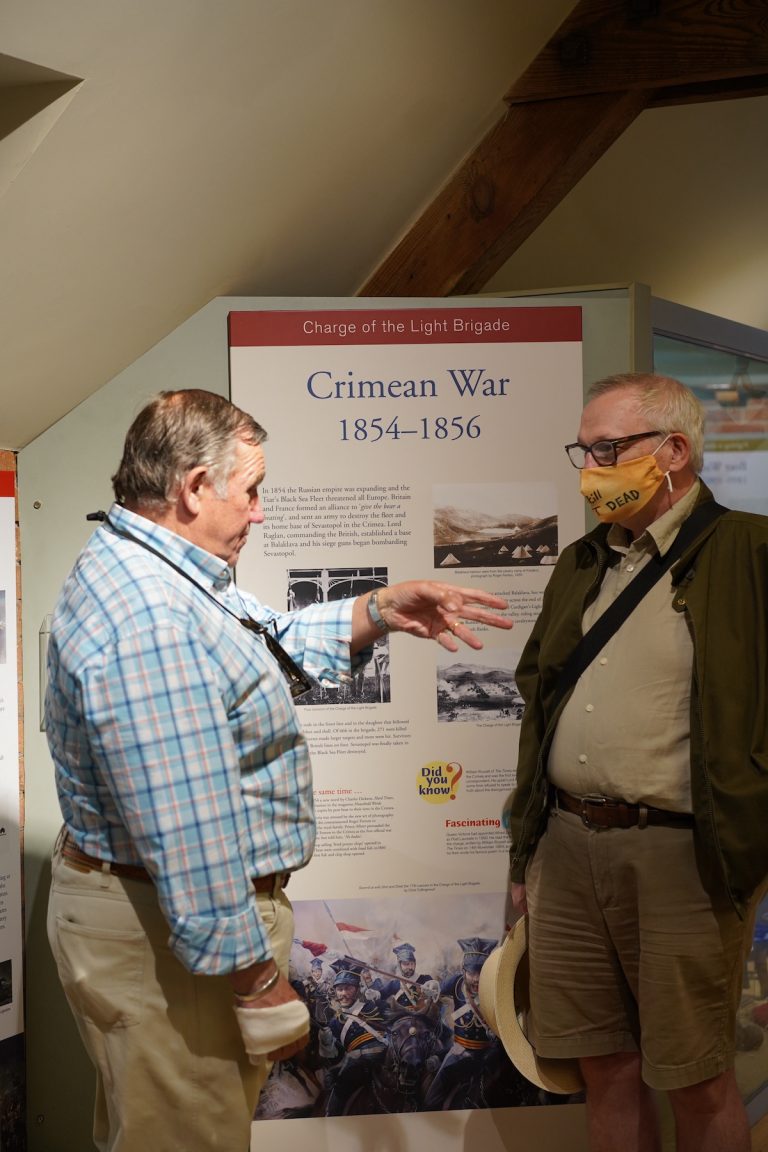 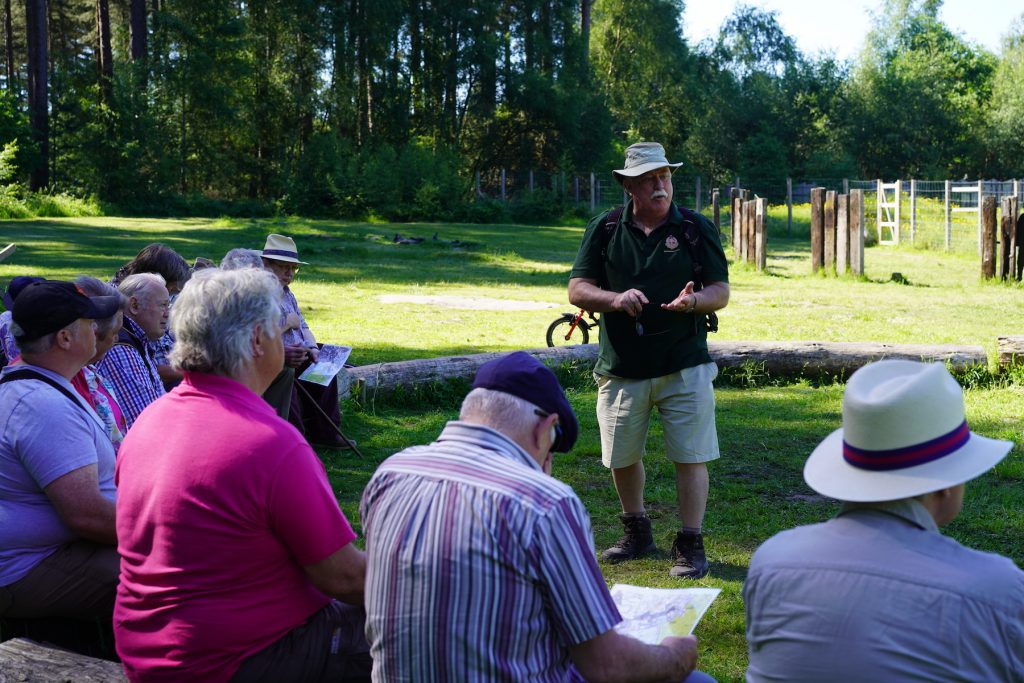 One of the highlights of the day, however, was seeing one of our Guides in full flow, as John Cotterill’s next stands took the group to Clipstone Camp. Sitting ‘in theatre’ at the trenches that have been reconstructed within Sherwood Pines Forest Park, the group listened attentively to John Cotterill’s detailed narrative, covering the history of the camp’s evolving role in the First World War. Following on from this introduction, it was then a short drive to see the site of Clipstone Camp and hospital – where our imaginations were aided by the excellent handouts of photographs and sitemaps, putting the location into context. Andy Johnson was ‘tail end Charlie’ today, taking us to see the RAF Halifax Bomber memorial (MZ519-LKU) at the end of the day. Set in a small clearing of British oaks and Canadian maples, the monument pays fitting tribute to the British and Canadian crew that crashed there during the Second World War – a great overview of the squadron, too.

Proof (as if we needed it), that with great planning and some excellent preparation and determination can get us back onto the battlefields or connected again with conflict in some way.  The weather couldn’t have been better; the company was excellent; the stands were educational, entertaining, and collaborative – is there any better way to engage your audience than through informed debate?! – and the whole day was enjoyed by Guild members old and new. Something for everyone. Thanks to John, David, Andy, and everyone who made it a great day.