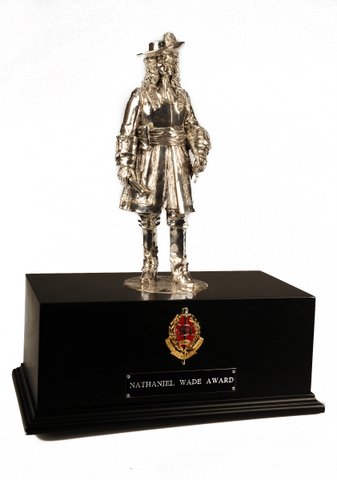 The Nathaniel Wade Award is named after one of the first Battlefield Guides. Wade was a Bristol lawyer and the hardworking creator of the rebel army during the Monmouth Rebellion in 1685. He was commissioned major by the Duke, commanded The Red (Monmouth’s) Regiment and fought at Bridport, Norton St. Philip and Sedgemoor. Captured, he turned king’s evidence and wrote a very detailed, day-by-day account of the campaign although only naming men already dead or under sentence of death. To gain dissenter support James II made the pardoned Wade Town Clerk of Bristol and to further his history of his own times had him conduct a royal tour of the Sedgemoor battlefield.

The award takes the form of a silver plated figurine of Nathaniel Wade in period military uniform.

The Nathaniel Wade Award allows the Guild to publicly recognise the contribution of an individual, group or organisation associated with the Guild, who through their efforts has made a significant contribution to the craft of battlefield guiding and the wider Military History community.

This is an annual award which will be presented at the Guild Annual Conference and AGM – however, the award is not restricted to events or a contribution made in year. The recipient may be recognised for their contribution or achievements made over a number of years.

The Nathaniel Wade Award may be presented to Guild Members or non-members; both categories are eligible to be nominated for this award.
Any Guild Member may nominate a potential candidate to the Secretary for consideration by the Management Board. Final selection of a recipient(s) will be made by the Guild Management Board.

The award recipient will be selected by a Board vote – the nominee(s) with the most Board votes will receive the award.
Presentation of the Award

The Nathaniel Wade Award will be presented by the Chairman on behalf of the Management Board at the Guild Annual Conference and AGM.